E-visas for Hajj and Umrah pilgrims

Earlier in March 2019, Saudi Arabia’s Ministry of Hajj and Umrah announced plans to start issuing electronic visas for pilgrims, allowing them to apply online and receive their visas within minutes.

“Currently, pilgrims who are coming from outside the Kingdom are tied to Hajj and Umrah service-providing companies and agents in their countries. The electronic visas will now be issued to these entities who will be licensed to facilitate Hajj and Umrah in these countries,” Abdulrahman Shams, general supervisor of the electronic platform for Hajj and Umrah, said in an interview with MBC.

An E-Visa facility similar to the one as provided by the United Arab Emirates, will make the process easier by issuing the visas without pilgrims having to send their passports to the embassy.

However, there was no confirmation whether this facility will be provided to Pakistani pilgrims travelling for Hajj in 2019.

Seems like Pakistan Government’s negotiations with Saudi Arabia proved to be successful as the Minister for Religious Affairs and Interfaith Harmony, Dr. Noor-ul-Haq Qadri announced earlier in the year about the E-Visa facility to Pakistani pilgrims.

It can now be confirmed that Saudi Arabia has stated issuing e-visas for Pakistani pilgrims. Image shown below of the first E-Visa issued. (note: personal details like name and image have been removed to protect the identity). 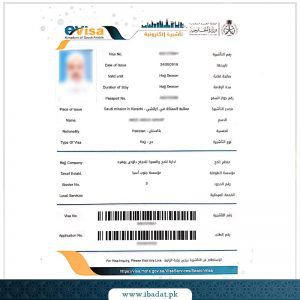 Why is this a very good development specifically for overseas Pakistanis?

This development is amazing news for overseas Pakistani’s specifically those living in the Gulf countries.

In Previous years, it was mandatory for overseas Pakistanis to come for Visa processing. However, with e-visa policy coming to Pakistan just for visa processing will no longer be required.

In Previous years, it was advisable to come at-least 15 days before group departure for visa processing. Number of days required however fluctuates year on year. This meant that Pakistani expatriates had to come twice to Pakistan if they had to go for Hajj – once for visa processing and once before travel.

Now, people will just have to come to Pakistan just a few days before flight departure for Hajj. This year, as yet, biometrics are not being taken as part of Hajj visa processing. In the future, if it is mandatory for Hajj visa processing, it may require travel before Hajj or if biometrics facility is available in their country of residence, they might be allowed to give biometrics there. There is no clarity on this part.

Hujjaj travelling with Hajj Organizers who offer flights transiting from their country of residence, may not have to come to Pakistan at all. How-ever this will purely depend on the Hajj Group Organizer, flights chosen and Pakistani Government policy.

Posted by Faisal Naeem in Hajj Info Guidance on May 26th, 2019

Important things to consider when making payments for your Hajj Package

It’s great that you have decided to go for Hajj and you now want to confirm and pay for your package. Before you make the payment for your Hajj Package, you need to remember the following important points in-order to protect your payments (as Hajj is no longer cheap and you are paying substantial money):

When making payments for your hajj package, it is always advisable to pay through the above-mentioned commonly used methods. This will ensure that you have a paper trail and proof of payment to the Hajj Group Organizer. Any other method that provides a paper trail (like paying through mobile wallets) can also work. But it is imperative that you can trace your transactions.

Make the payments only in favour of the Hajj Group Organizer

It is extremely important to remember that the account title (on your cheque, pay order etc) / account name (if making online transfer / digital wallet transfers) is of the Hajj Group Organizer that you will be traveling with,

For Hajj, never make payments in favour of any other company or individual! This point can not be stressed enough.

We at Ibadat.pk will always tell you the name of the verified Hajj Group Organizer that you are being booked on. Furthermore, wewill never ask you for payment of Hajj Packages.

You should also verify that the Hajj Organizer is registered with the Ministry of religious Affairs.  All Hajj Packages listed on our website are by verified Hajj Group Organizers. However, for your own satisfaction you can follow the method of verification (as defined in our in-depth article on how to verify Hajj Operators) and do it your self as well before finalizing your bookings.

Ask for a receipt / invoice of your payment or deposit

Always ask for an invoice of the amount of money that is paid by you. Remember, there can be circumstances where, invoice may not be available. In these cases, always get a signed and stamped copy of the cheque you are giving, as a proof of payment. In cases of online transfer or pay orders, paper trail is very visible  so these methods are generally safer.

It is important to understand each and every facility that you have paid for as part of the Hajj Package e.g,

When we say published price of the package, we mean the price mentioned in your hajj forms filled out by the Hajj Group Organizers.

You should also review prices as published in promotional material like brochure’s, flyers etc. It is very important to note that price in Saudi Riyal is what needs to be verified. Due to the recent economic crisis in Pakistan and the quickly depreciating Pakistan Rupee, many Hajj Group Organizers have released packages in Saudi Riyals. Even if they have not, you need to take into account the dramatic fluctuations.

Please remember,  prices in Saudi Riyal will stay the same throughout the booking period (of a particular season eg Hajj 2019). However, PKR prices may fluctuate due to our unstable currency.

Hence, always look for the published price in SAR.

Rate of Exchange at the time of payment is applicable

It is not necessary that a person makes the whole payment at once. Depending on the policies of the particular Hajj Group Organizers, many potential hujjaj make payments of their Hajj Packages at different times. How-ever it is important to note that, if the rate of exchange fluctuates in the time between when you make the initial deposit and the time when you make your subsequent deposits, then the new exchange rate will become applicable on the remaining amount that needs to be paid.

Hence it is advised that potential Hujjaj make complete payments as soon as possible, to protect them selves from the fluctuations.

Posted by ibdat@dmin in Hajj Info Guidance on May 16th, 2019

The impact of exchange rate on Hajj Package Price

Pakistani Rupee in a State of Free Fall:

Rupee’s tumble has begun. The value of the US dollar against the rupee touched another all-time high for the second consecutive day, reaching approximately Rs148 in the inter-bank market (as of 12:30 Pm – 16 May 2019).

“Fears of further devaluation as a result of the agreement with the IMF have depressed the currency market and the rupee may lose more against the greenback in the coming days,” Secretary General of Exchange Companies Association of Pakistan Zafar Paracha as reported by Dawn.

Approximately, 85% to 90 % of the payments Hujjaj make for their packages is sent to Saudi Arabia by the operators to make arrangement (like hotel bookings, Maktab payments, food and transport arrangements etc). Only a very small portion of these payments are used for arrangements in Pakistan as these arrangements are limited to Hajj Training Programs, give aways and salaries for Hajj teams traveling from the country.

For many Hajj Group Organizers, the current scenario is very much a flash back from last year’s Hajj.

in 2018, Hajj Operators were stuck in exactly the same situation, as when they released their Package last year the exchange rate was: SAR 1 = PKR 29. However when the booking were being made, it had crept up to SAR 1 = PK34.

Previous trend in the market has been such that Hajj Packages were released in Pakistani Rupees for easy understanding and communication of the package details. However since the Pakistani Government does not provide any protection to businesses in terms of shielding from currency fluctuations like offer financial products like currency futures / swaps etc – Hajj Group Organizers suffered huge exchange rate losses due to this in 2018.

Keeping in mind last years situation,  most of the Hajj Organizers have released Hajj Package Prices for 2019 in Saudi Riyal.

How can potential Hujjaj protect them selves from depreciating Rupee

Hajj Package prices are pegged in Saudi Riyal (SAR) and the prices provided in SAR would not change during on going bookings. However as stated previously if Pak Rupee depreciates, the package price will automatically rise.

Hence if you have decided to go for Hajj in 2019, then the best way to protect yourself from fluctuations is by :